Trust the science? Media reports Covid-19 is a "pandemic of the unvaccinated" but CDC counts people dying within 14 days of vaccination as "unvaccinated"!
Why is FDA ignoring 10s of 1000s of post-vaccine deaths and disabilities? Could it be that nearly 70% of FDA funding comes from pharmaceutical companies?

Human Rights Attorney Leigh Dundas at the Rally to Reopen California at the Capitol in Sacramento, Memorial Day, 2020

Dr. Dan Erickson MD and Dr Artin Massihi MD owners of Accelerated Urgent Care with seven locations in Southern California say that the real data must now replace the computer models and projections that were the impetus for the initial panic, social distancing and quarantines.

Carbon dioxide is known as an "asphyxiant," which is a substance that bonds with your blood in place of oxygen.

“Respiratory acidosis develops when air inhaled to and exhaled from the lungs does not get adequately exchanged between the carbon dioxide from the body and the oxygen from the air“
medicalnewstoday.com/articles/313110

Pleurisy, also known as pleuritis, is inflammation of the membranes that surround the lungs and line the chest cavity (pleurae). This can result in a sharp chest pain while breathing. Pleurisy can be caused by prolonged mask wearing! But, imagine what doctors would say if you went to a hospital today and reported that symptom! No doubt you would be diagnosed with COVID-19!

Crystal Jones wrote: My daughter. 19 yrs old. Healthy. Frontline worker at a huge grocery store chain. Started feeling sick about two weeks ago. Side and back pain. Nausea. Chest pain. Primary doc sent her for a chest x-ray.. Something "lit up" on right side. Sent for MRI, CAT scan. Ultrasound of back and abdomen areas. NOTHING. While at work was unable to breathe. Chest pain. Rushed to Emergency. Quarantined. Tested for COVID. Young. By herself because no one can be with her. Turns out its pleurisy. An inflection of the outside of the lining of the lungs. They basically tell her.. It's because she has been wearing a mask for over 8 hours a day 5-6 days a week. Breathing in her own bacteria. Carbon dioxide. Caused an infection. And now she is in severe pain. Has to be off work with no pay. But you wont see that on social media! She's 19. Healthy. And now is bed bound and struggling to breathe. Antibiotics. Steroids. Breathing treatments. Masks can cause pleurisy, hypercapnia, respiratory acidosis and brain damage.

Peggy Hall cites the OSHA regulation that requires a workplace to provide Oxygen levels of at least 19.5%. [§5149. Oxygen Deficiency. Except in extreme emergency involving imminent peril to life, employees shall not be permitted to work without approved respiratory equipment where the oxygen content of the air is less than 19 1/2 percent by volume.]  A mask causes exhaled CO2 to be trapped in the mask, displacing the Oxygen required for the next in breath. Thus, as shown on the meter, the Oxygen level inside the mask immediatly drops below 19.5%. For more, see Peggy's website TheHealthyAmerican.org

Researchers found that about a third of the workers developed headaches with use of the mask, most had preexisting headaches that were worsened by the mask wearing, and 60% required pain medications for relief. As to the cause of the headaches, while straps and pressure from the mask could be causative, the bulk of the evidence points toward hypoxia and/or hypercapnia as the cause. That is, a reduction in blood oxygenation (hypoxia) or an elevation in blood C02 (hypercapnia).

It is known that the N95 mask, if worn for hours, can reduce blood oxygenation as much as 20%, which can lead to a loss of consciousness, as happened to the hapless fellow driving around alone in his car wearing an N95 mask, causing him to pass out, and to crash his car and sustain injuries. I am sure that we have several cases of elderly individuals or any person with poor lung function passing out, hitting their head. This, of course, can lead to death.

A more recent study involving 159 healthcare workers aged 21 to 35 years of age found that 81% developed headaches from wearing a face mask. Some had pre-existing headaches that were precipitated by the masks. All felt like the headaches affected their work performance.

Unfortunately, no one is telling the frail elderly and those with lung diseases, such as COPD, emphysema or pulmonary fibrosis, of these dangers when wearing a facial mask of any kind—which can cause a severe worsening of lung function. This also includes lung cancer patients and people having had lung surgery, especially with partial resection or even the removal of a whole lung.

The importance of these findings is that a drop in oxygen levels (hypoxia) is associated with an impairment in immunity. Studies have shown that hypoxia can inhibit the type of main immune cells used to fight viral infections called the CD4+ T-lymphocyte. This occurs because the hypoxia increases the level of a compound called hypoxia inducible factor-1 (HIF-1), which inhibits T-lymphocytes and stimulates a powerful immune inhibitor cell called the Tregs. This sets the stage for contracting any infection, including COVID-19 and making the consequences of that infection much graver. In essence, your mask may very well put you at an increased risk of infections and if so, having a much worse outcome.

People with cancer, especially if the cancer has spread, will be at a further risk from prolonged hypoxia as the cancer grows best in a microenvironment that is low in oxygen. Low oxygen also promotes inflammation which can promote the growth, invasion and spread of cancers.  Repeated episodes of hypoxia have been proposed as a significant factor in atherosclerosis and hence increases all cardiovascular (heart attacks) and cerebrovascular (strokes) diseases.

Germany’s federal government and mainstream media are engaged in damage control after a report that challenges the established Covid-19 narrative leaked from the interior ministry.

Some of the report key passages are:

The dangerousness of Covid-19 was overestimated: probably at no point did the danger posed by the new virus go beyond the normal level.

The people who die from Corona are essentially those who would statistically die this year, because they have reached the end of their lives and their weakened bodies can no longer cope with any random everyday stress (including the approximately 150 viruses currently in circulation).

Worldwide, within a quarter of a year, there has been no more than 250,000 deaths from Covid-19, compared to 1.5 million deaths [25,100 in Germany] during the influenza wave 2017/18.
The danger is obviously no greater than that of many other viruses. There is no evidence that this was more than a false alarm.

A reproach could go along these lines: During the Corona crisis the State has proved itself as one of the biggest producers of Fake News. So far, so bad. But it gets worse.

The report focuses on the “manifold and heavy consequences of the Corona measures” and warns that these are “grave”. More people are dying because of state-imposed Corona-measures than they are being killed by the virus.  More

The present paper about masks illustrates the degree to which governments, the mainstream media, and institutional propagandists can decide to operate in a science vacuum, or select only incomplete science that serves their interests. Such recklessness is also certainly the case with the current global lockdown of over 1 billion people; an unprecedented experiment in medical and political history.

VANCOUVER -- While COVID-19 has spread globally for months, many questions still remain about the relatively new virus.

One of B.C.'s top health officials, however, says medical professionals have a pretty clear picture of how the virus is transmitted.

"There is absolutely no evidence that this disease is airborne, and we know that if it were airborne, then the measures that we took to control COVID-19 would not have worked," Dr. Reka Gustafson, B.C.'s deputy provincial health officer, told CTV Morning Live Monday.

"We are very confident that the majority of transmission of this virus is through the droplet and contact route."

Gustafson explained that airborne diseases – like measles or chickenpox – have a different way of transmission.

"The overwhelming majority of (COVID-19) transmissions occur through close, prolonged contact and that is not the pattern of transmission we see through airborne diseases," she said. More 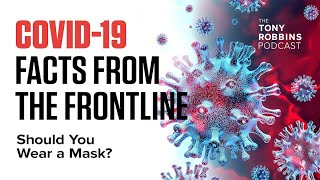 Senator Scott Jensen, MD: Masks Outside of Surgery is Lunacy

8 Finland Reviews: Little or no Benefit to Widespread Mask Use

Research has shown that widespread use of face masks have little or no effect on reducing the spread of upper respiratory infections, according to a report presented a government-appointed working group led by the Ministry of Social Affairs and Health (MSAH) on Friday.

"There is no scientific evidence for its use," Emerita Professor Marjukka Mäkelä said at a press briefing to unveil the report.

The report was commissioned by the government to determine if there were grounds to recommend the widespread use of masks to prevent the spread of novel coronavirus. It looked at commercial mouth and nose coverings for use by members of the public as well as home-made masks.

The writers of the report reviewed scientific research on the use of protective masks and also examined mask practices and guidelines in several other countries.

The public health officials said that five of eight systematic reviews found no evidence that the use of masks would provide any benefit in controlling sources of infection or protecting healthy persons from exposure to respiratory infections. Three reviews were cautiously positive in this regard.

Dr. Eric Napute: "You have to understand, the system is set up to kill people right now." ... "It is beyond out of control, it is now time to push back. You push back with knowledge, wisdom and actions. Enough is enough. Take off the mask."

Gainesville, FL (June 16, 2021) – A group of parents in Gainesville, FL, concerned about potential harms from masks, submitted six face masks to a lab for analysis. The resulting report found that five masks were contaminated with bacteria, parasites, and fungi, including three with dangerous pathogenic and pneumonia-causing bacteria. No viruses were detected on the masks, although the test is capable of detecting viruses.
The analysis detected the following 11 alarmingly dangerous pathogens on the masks:
• Streptococcus pneumoniae (pneumonia)
• Mycobacterium tuberculosis (tuberculosis)
• Neisseria meningitidis (meningitis, sepsis)
• Acanthamoeba polyphaga (keratitis and granulomatous amebic encephalitis)
• Acinetobacter baumanni (pneumonia, blood stream infections, meningitis, UTIs— resistant to antibiotics)
• Escherichia coli (food poisoning)
• Borrelia burgdorferi (causes Lyme disease)
• Corynebacterium diphtheriae (diphtheria)
• Legionella pneumophila (Legionnaires' disease)
• Staphylococcus pyogenes serotype M3 (severe infections—high morbidity rates)
• Staphylococcus aureus (meningitis, sepsis)
Half of the masks were contaminated with one or more strains of pneumonia-causing bacteria. One-third were contaminated with one or more strains of meningitis-causing bacteria. One-third were contaminated with dangerous, antibiotic-resistant bacterial pathogens. In addition, less dangerous pathogens were identified, including pathogens that can cause fever, ulcers, acne, yeast infections, strep throat, periodontal disease, Rocky Mountain Spotted Fever, and more.
The face masks studied were new or freshly-laundered before wearing and had been worn for 5 to 8 hours, most during in-person schooling by children aged 6 through 11. One was worn by an adult. A t-shirt worn by one of the children at school and unworn masks were tested as controls. No pathogens were found on the controls. Proteins found on the t-shirt, for example, are not pathogenic to humans and are commonly found in hair, skin, and soil.
A parent who participated in the study, Ms. Amanda Donoho, commented that this small sample points to a need for more research: “We need to know what we are putting on the faces of our children each day. Masks provide a warm, moist environment for bacteria to grow.”
These local parents contracted with the lab because they were concerned about the potential of contaminants on masks that their children were forced to wear all day at school, taking them on and off, setting them on various surfaces, wearing them in the bathroom, etc. This prompted them to send the masks to the University of Florida’s Mass Spectrometry Research and Education Center for analysis.